It was while teaching a group fitness class eight years ago that Amanda was first shocked by a sharp pain on the left side of her face. She tore off her microphone, her first reaction, thinking it had shorted out or somehow “gone wrong”. When that did not help she went immediately to the emergency room where they gave her pain pills, which did not work. They sent her to her doctor who sent her to her neurologist.

She had seen this neurologist just the year before due to some weird tingling she was having in her fingers all the time. He thought she was fine but since this was also on the same side, the left side, she wonders if there somehow was a link. It took several months before she was correctly diagnosed. It required taking Trileptal to see if it would work, as oxycarbamazepine is a first run treatment for Trigeminal Neuralgia. It worked. And it stopped her in her tracks … she now had to live with a chronic disease.

At the time Amanda was also working in a middle school with her degree in social work and education. After 16 years of helping young people through individual and group counseling, Trigeminal Neuralgia got the best of her. She felt she could not be fully present with her students as she was having difficulty focusing. Although she really did not want to abandon them before the school year ended, she had to. This was not an easy decision for her! 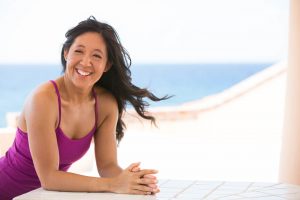 Amanda Young has worked as a group fitness instructor for 17 years and currently teaches for Equinox Fitness Clubs. She has been featured in various national publications as an expert in H.I.I.T. training, an enhanced form of interval training that alternates between periods of short intense anaerobic exercise with less-intense recovery periods … the latest understanding of an effective fitness strategy. She is also an expert trainer for Acacia TV, a digital fitness channel providing online streaming workouts.

Since her job at Equinox was a part time position and had some flexibility, she was able to maintain her commitment there. But like so many Trigeminal Neuralgia warriors, Amanda did not share what she was going through with others.

That is, until about two years ago when the pain became constant; a pain she describes as like having her teeth knocked out! She had to take time off. In order to get substitutes for all her classes she felt obliged to explain why it was imperative… that she could barely function. These experts in the same field were the only ones who knew her secret.

Then in June of last year, 2014, the online support group, “Living with TN” sent an email to New Yorkers letting them know that the TV network CNN wanted to do an interview with someone who was willing to talk about their Trigeminal Neuralgia story. Amanda gave it some thought and decided that maybe it was time to share her experience. She replied to the email and had a phone interview with a reporter who told her that she had interviewed a lot of people but “you have THE most interesting story. You help people all day, and yet you come home at night and cry in pain … a very captivating story and I think we are going to use you.” She freaked out! She couldn’t do it! She was not emotionally ready. The reporter was going to get back to her but never did and Amanda felt relieved.

But that got her to thinking that this was something she needed to do, not only for her own personal growth; to feel all the fear and shame and all the feelings that come along with telling people she has an illness, but also because it was an opportunity for her to really help the people who don’t know what they have, the people who do know they have TN and don’t know what to do or don’t want to tell anybody. She processed this for a whole year to get ready. 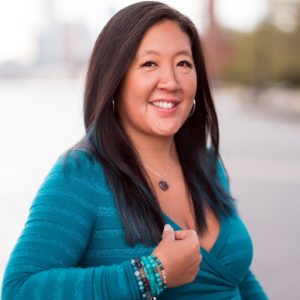 When her disease progressed and started to take over her life 24/7 she realized it was getting harder to hide, and it was affecting her ability to do a lot of the things she really loved to do. She knew she had to, in a way, reinvent who she was and to find a bigger purpose. Maybe her need to want to help people could be transitioned into something larger, more impactful than what she was currently doing. To her that translated into raising awareness and helping to find a cure for Trigeminal Neuralgia.

A lot of Trigeminal Neuralgia sufferers struggle with medications, getting the right “mix” and are not good candidates for surgery. When they do have the surgery it doesn’t always work, and when it does there is no guarantee it will last. The pain does not allow you to focus on what it is that makes you happy because you can easily get sucked into the negativity of pain and suffering. It is a very dark place.

Like most people, Amanda had expectations about the way she wanted her life to be. She went through a very difficult period of about 6 months when she felt very angry. She knew she had to work through that anger and figure out what it was that was happening. Once she let go of the way her life “should have been” and embraced the life that was actually in front of her she realized she could find happiness again. She has an incredibly positive attitude. She wants others to know you can always live a fulfilling life despite any obstacle you face. You just have to figure out what makes you feel happy and fulfilled.

Amanda realized that she could transition all the things she loves to do into something else that could help change others’ lives. “I am fortunate to have a really good network in NYC both in social work and in fitness.” She has found her passion … as she says “You can’t just work. You have to work to make a difference. I feel good about what I do at the end of the day. Helping someone else to change their life is what helps me get through the day.”

Her new goal in the next 3 to 5 years is possibly having to transition out of fitness (but she hopes not) and start a non-profit providing health and life coaching for people who live in chronic pain, not just TN suffer warriors but all types of chronic pain. Therefore, her purpose can remain the same and still entails the same basics of fitness and helping. In addition it allows her the opportunity to bring light to suffering people with a wider reach, not just those in her NY network.

When Amanda had that really bad run of TN a couple of years ago and was getting shocks almost non-stop, she was ready to take the risk of getting surgery even though doctors were not sure she was a good candidate. She was responding to meds on and off and there was no visible compression that they could see and there were also other pains she was experiencing. Her neurologist wanted to do further tests to see if she had some other autoimmune disease. When I asked if she was tested for MS, she said she did not have that test done. She still wanted to live life and that diagnosis would make her think she could not move anymore. She was not willing to take that chance; that chance that her mind would take her down the dark hole again.

When Amanda had to leave her social work job, she started going to an acupuncturist. Someone had given her the name of a doctor from China who did not speak English, but who had cured people of many rare ailments. Desperate for relief, it was very, very hard at first, as it was firing up the nerve even more. The acupuncturist kept telling her to trust him and to stay with it and “I promise you” it will get better. Knowing she would do anything to live a full healthy life again, she kept going to see him three times a week. Around the tenth session she started to feel a lot better. She went from having 30 – 40 shocks in an hour, each lasting 5 – 10 seconds, nonstop all day, to having 30 a DAY! Huge difference. She went for three to four months straight for 3 days a week religiously and she stopped having attacks!!!!! (She states she knows this won’t work for everyone, but I, for one, would certainly try it!)

Since she felt better and it was so expensive Amanda finally stopped going. She did really well for close to a year, until March of last year when it came back as something different. This time it felt like an unrelenting toothache, so she initially went to see a dentist specializing in patients with TN. She started going back to the acupuncturist 3 days a week, and that helped to lessen the pain. She says that without it she would be a lot worse off. The shocks come very rarely now. Although she is in pain just speaking with me, she is happy to tell her story. When she skips seeing her acupuncturist she pays with pain. “I don’t live a life without pain anymore.” The same day that she goes to him the pain flares up; then for a few days afterward the pain is 60 – 70% better. This she can live with. When asked if she wished she had just continued with him since it took the pain away initially, she replied that she cannot live with regrets. She just doesn’t go there.

She still takes a high dose Trileptal, which she never stopped taking. She had difficulty taking the meds at first but her body adjusted to them over time; however she can only take it at night now because she is unable to stay awake after taking them. The drug combinations they suggested had made her deathly ill. She’d rather be in pain and working than at home puking, as she exclaims!

She considers herself really lucky when she thinks of the people in the world who are suffering. She can still go out during the day and work, even if it is just for an hour at a time. Some people can’t even do that. She sees her path as doing what she can to make it better for other people.

When she is working with her fitness classes she almost forgets about the pain in some ways … until it’s over! “It’s powerful to be in a room full of people with goals that you are helping them to achieve.”

Some of the best fitness instructors in the industry, as Amanda says, “NYC has some of the best fitness talent”, are donating their time and expertise to the fundraising event called Face The Change, that Amanda is holding at the “Dream Hotel” in Chelsea area of Manhattan (a feat in itself, just finding and securing a place in the city!) The hotel donated the space with the assistance of Lululemon Athletica, a yoga and fitness apparel company for which Amanda is a brand ambassador in the Union Square location. They also sponsored her video revealing others of her disease.

Acacia TV has also been instrumental in their support of her and her fundraiser, and they are hoping to assist in helping this fundraiser to receive national media coverage. No matter how much money they raise, the campaign will bring more awareness and, as she says, that is priceless. Classes are one hour long and can be paid for individually in case people want to take more than one. You can also just donate of course! Proceeds from the event will go to The Facial Pain Research Foundation.