When TN Takes Everything: Erin Canter

Previous Next
When TN Takes Everything: Erin Canter 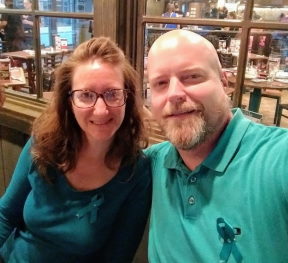 It seemed like Trigeminal Neuralgia took everything from Erin Canter. After being diagnosed, her entire identity shifted and she lost many critical aspects of what made Canter herself: the ministry she loved, her job, an active lifestyle, and social world. Canter recalls the depth of loss felt when TN caused her world to come crashing down. However, at rock bottom, one thought persisted above all others – even above the loss and the pain.

Canter decided to transform her life, reclaiming and rediscovering her identity while helping others who are diagnosed with Trigeminal Neuralgia do the same. Canter is a minister within the Christian religion, former nurse, and is well informed on developing close social spheres through social media to connect people who may be home bound due to illness. She has chosen to turn her pain into purpose and uses her experiences to connect people in pain.

Canter’s first experience with TN symptoms occurred in 2005 with what she describes as a “shock” sensation on one side of her lower jaw. She originally assumed the issue to be dental and scheduled an emergency visit with her dentist. The dentist assessed nothing abnormal and suggested perhaps there was an isolated irritation, offering the pull the tooth if Canter would like. She declined.

After this initial experience, Canter did not experience pain for another eight years until it hit once again in full force in 2013. While participating in a 5k in December, she was hit with an icy wind that triggered the same intense pain. This incident prompted a visit to her family doctor who began an investigation for diagnosis. Between documentation from multiple dental and ER visits, the doctor was able to put the puzzle pieces together and suggested Canter was diagnosed with Trigeminal Neuralgia. Canter began to see specialists, the first of which told her TN was only in the lower jaw and rejected the diagnosis. She moved on to a second neurologist who insisted Canter was only having migraines.

It was the third neurologist who put constructed Canter’s current diagnosis of bi-lateral, a-typical Trigeminal Neuralgia, Fibromyalgia, and Migraines.

At that time, Canter’s professional background as a nurse was both a blessing and burden to her. On one hand, she understood more thoroughly the information that her neurologists were telling her. On the other, however, she had experienced a TN patient prior and understood the implications of the disease.

“When he said the words ‘Trigeminal Neuralgia,’ I said, ‘No,’” Canter says. “I knew a nurse who had it and I had worked with her and I would be in the conference room adjacent to her office and I could hear her in there. That’s how I knew what it was.”

Canter’s doctors started her on Tegretol which has been titrated up. They later added Lyrica to her medication regimen, which has been increased, along with neuropathic pain medication Amitriptyline to assist with sleeping. Due to medication side effects, Canter has lost one tooth and has had three crowns. Getting dental work done with TN is an incredible strain, Canter says, and she is appreciative of her dentist who she says is very considerate of her pain and holds regular discussions regarding her dental health.

“I have IV sedations. It’s the same [hygienist] who comes in every time and they are just awesome. They take good care of me,” she says. “It’s a frightening experience and they just made it very comfortable.”

In brain scans including MRA and MRI FIESTA, no compression of the Trigeminal Nerve was seen, ruling out a microvascular decompression from her treatment options. She has underwent bloodwork to assess Vitamin B Levels and has been screened for other diseases with no resolution as to what has caused her TN.

“It’s so frustrating because I don’t know what’s causing it,” she says. “I wish I knew.”

Canter visited with a neurosurgeon to explore other surgical options, however, he suggested holding off on surgical intervention as she typically experiences a 50/50 ratio of pain free to painful days every month. To supplement her treatments, Canter has attempted to adjust her diet and has tried aromatherapy and heat therapy.

Today, she describes her pain as crushi  ng, crawling, burning, and “red hot like fire.” Periodically when she experiences a flare, her face will break out with a rash that appears similar to acne. She finds that temperatures below 30 degrees greatly impact her pain level, and so she chooses not to go outside on those days. Setting these types of lifestyle boundaries, she says, has helped her to learn to better manage her pain. At this time, Canter says she is very happy with her medical team and is appreciative of the trusting relationship she has with her doctor.

“I can call him anytime,” she says. “He is very good about that. I think you have to have a good doctor who’s willing to work and partner with you – not just sit there and tell you, but to listen and say, ‘Is this treatment acceptable to you.’ And he does that.”

Following diagnosis, Canter says she was in denial – stage one of the Kubler-Ross Grief Cycle which includes denial, anger, bargaining, depression, and final acceptance. She initially refused to take the medications doctors attempted to prescribe her. Though Canter was able to finish her master’s degree, she lost her job shortly after and is currently on disability. This complete upheaval of her life led Canter to the moment where she had to decide what she wanted out in the future.

“That pivotal moment for me was when I said enough is enough,” she says. “There has to be something more … I have to continue to do what I do. I can’t just do nothing. I couldn’t just sit here and not do anything.”

Canter found renewed motivation in what had always inspired her previously: Helping others. As a minister and nurse, her entire life had been about connecting people and lending a hand to those in need. Determined to do the same for herself, Canter says she developed habits which have enabled her to reclaim aspects of her former life in a new way which enables her to assist an entirely new population.

“I still have my moments,” she says. “I just had a four-day flare up and it felt like just let me die. That’s how you feel, but at the same time, I just keep holding on to that hope that tomorrow is going to be better. I try to take one day at a time.”

Canter has a plethora of stories about encounters she’s had with people who she may never have been able to help otherwise – coworkers, church members, childhood friends. In this way, she believes her journey with TN has made her stronger and more capable.

“It is a horrible thing. But, if you can turn your mindset to ‘that’s where I am,’” she says. “I view it as a way to get closer to God. I view it as a way to help other people because I understand what they’re going through. I understand what they feel. I’ve been through some of it and already have gone through those stages of grief. … I’m here at this point and time for you specifically.”

Though Canter’s life has vastly changed, one thing has stayed the same: her desire to connect with people. However, being diagnosed with a chronic pain illness often means that maintaining a social life can be extremely difficult. Canter understands how TN impacts a person’s ability to be social – often reducing someone’s ability to go into public and sometimes causing relationships to be lost. This is where she says social media, when used correctly, can become a building block for relationships from the comfort of one’s own home.

“I’m not in the same room, but I can have the same relationship,” Canter says. “That’s a fantastic way for people who can’t get out and who are isolated. … I don’t have as much socialization that I had. I really have to work at that. You have to make more of an effort and that’s why I feel getting online was my effort. I’m going to be with people.”

Canter manages her Facebook group “Renew” for people like herself diagnosed with TN who hold spiritual beliefs within Christianity. She caters this specifically for people who are dealing with pain with sermons focusing on such topics. There are guest musicians and speakers who volunteer to share in the group. With her church, Canter also leads an online “life group” in which members meet via Zoom video conference to hold Bible studies. Through Zoom, a video-conferencing platform, all those in attendance can see each other in a virtual “face to face” format.

Platforms like Facebook Groups and Zoom are excellent methods of socialization for those who struggle to maintain a social life due to inability to leave the house much. It enables people to discover a community of like-minded individuals even if their experiences are as rare as being diagnosed with TN. Canter reminds social media users to be cautious, however. As a nurse, she understands how widespread misinformation can be online – especially on patient-led social pages in which the contributors are simply members of a group and not experts. Canter encourages those seeking online communities to understand the difference between research organizations such as the Facial Pain Research Foundation where medical and scientific information can be trusted, and online support groups where people can share their thoughts and feelings.

Canter also encourages members of social media to guard their mental health when engaging in patient-led social media support groups as much of the content posted there can be negative regarding the “bad days” which members are having.

“You see a lot of negative things. You can get on there and be absolutely terrified,” she says. “I’ve got to live another 40 years with this. Am I going to live like this for the rest of my life? I hope not. So, let’s get some cures!”

Canter has been an active part of helping find a cure through fundraising for FPRF research – raising nearly $1,000 at her most recent event in October. It’s all part of her mission to live her life to the fullest and help others do the same in the process by cultivating healthy mindsets, engaging in social contact, maintaining hope for a cure, and rediscovering how to live life.

One of Canter’s favorite quotes is by 1800s preacher Charles Spurgeon: “I have learned to kiss the wave that throws me against the Rock of Ages.” Taking these words to heart, Canter says she lives every day using her experiences and pain to create purpose for herself and others.

“This has not pushed me down under,” Canter says triumphantly. “It has pushed me against my faith.”