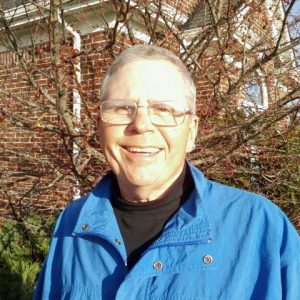 Douglas K. Anderson, Ph.D., is eminent scholar professor and chair emeritus of the Department of Neuroscience at the University of Florida, College of Medicine, former director of the McKnight Brain Institute at the University of Florida. He is director of research and a trustee of the Facial Pain Research Foundation. He was interviewed by Mervyn Rothstein, who was a writer and editor at The New York Times for nearly 30 years and now writes the Stage Directions column – a series of interviews with theater directors – for Playbill.com. His first symptoms of trigeminal neuralgia occurred in 2005

MR: Why did you want to be a scientist, and how did you become one?

I had a cousin who was a physician, and he kept after me to go into medicine, saying we would go into practice together. So between my junior and senior year at the University of Texas I got a summer internship at MD Anderson Hospital in Houston, which is a world-class cancer hospital. I was there for about three months, and about a month into it I realized that if I had to make a living as a doctor I would starve to death, because it was difficult for me to work with sick people. I was dealing with pediatric cancer cases and I would go home and cry. But I had spent about half my time working in the research laboratory, and I loved the lab. So I went back to school and changed my major from zoology pre-med to straight zoology. I didn’t tell my parents until Christmas – which was an interesting Christmas. And I went back to Anderson Hospital after I graduated and worked with a Ph.D. instead of an M.D. I got my masters at the University of Houston, and my Ph.D. at Michigan State in 1972.

MR: You worked for 33 years for the Veterans Administration. What kind of work did you do?

I was there from 1973 until I retired in 2006. The V.A. was very good about allowing us to have appointments at medical schools, so I had a dual appointment. I was working on spinal cord injury both with my academic appointments and at the V.A. I was for a year the Department of Veterans Affairs Deputy Director of Medical Research.

MR: Why after more than 30 years of researching spinal cord injury did you decide to turn your efforts to finding a cure for trigeminal neuralgia?

The main reason was that spinal cord injury was so complex, because the spinal cord is so complex. We were working on locomotor function – movement – which is an incredibly difficult thing to do. Spinal cord injury is a constellation of symptoms – bladder function, sexual function, pain, temperature regulation, so many things. So I decided that instead of trying to hit a home run, I would go after a bunt single. One of the major complaints most spinal cord patients have is pain, and all scientists generally in a situation like that look for the simplest model. I’m not saying that trigeminal neuralgia is a simple model, but relative to spinal cord injury it is. One nerve, a big nerve, and the pain is in that nerve. I became interested in mechanisms and the patho-physiology of pain.

MR: How is the Facial Pain Research Foundation unique from other research organizations?

MR: How were you able to attract top researchers in the world to such a small foundation?

Instead of having them submit a grant, we say, this is what you’ve been doing, give me something we can hang a hat on, then go and do what you think will be exciting. So instead of their having to deal with a bureaucracy and submitting a grant every six months or a year, we, on a small scale, give them the money quickly, give them their leeway and see what they can do.  I call this “money with soul.” This is money given by people directly. This is not some faceless National Institutes of Health grant given with your taxpayer dollars.

MR: You were chairman of a prestigious neuroscience department and director of the McKnight Brain Institute.  Why is the Facial Pain Foundation’s research so important to you? Is it in part because a solution to neuropathic facial pain would also help provide scientific answers for multiple sclerosis, epilepsy, back pain, and other neuropathic pain?

Yes. I think it has a chance of making a difference. Mother Nature in my opinion is very conservative. The neurotransmitters in the gut are very similar to those in the brain, except you have different receptors and they work in a slightly different way. I look at this, and I think other people do too, as hopefully being sort of a Rosetta stone for pain, for neuropathic pain. Fundamental mechanisms are involved, and I think we can have a broader effect than just trigeminal neuralgia, also maybe diabetic pain and other pains. I think this research has a chance to be bigger than what you might expect it be.

MR: How difficult is it to describe the science and the research to nonscientists?

For me, it is not too difficult. I’ve dealt closely in spinal cord injury and now in trigeminal neuralgia with the patient population we’re serving. I’ve always felt it was important to go to them and try to explain what we’re doing. I just hope that when I simplify it for lay people I’m not overdoing it so that I’m giving them incomplete or false information.

MR: At the beginning of 2011, the foundation set a goal of finding cures within ten years of establishing its research program.  At a minimum, what do you hope to accomplish before the end of 2020?

I’m hoping we will have a handful of genes or one gene we can hand off to others to test, and do animal studies and see if we can chart models of neuropathic pain by using the gene or the constellation of genes working together. To see if we have pain because they’re not working together, or we have pain because they’re overworking. Also, at the very minimum we hope we will have done human tracking with MRIs to chart the pain pathways that are involved, and locate the pain signal from the nerve to the brain, to where the brain can process it. And once you have that, then you have targets to do your intervention, do your injections. When you see which pathways are involved, you can define the neurotransmitters, so you can attack it that way. We are also hoping that the gene people will have solid data on how complex the gene interactions are – which is the alpha dog gene, or if there is an alpha dog gene, and how the genes interact.

“The Facial Pain Research Foundation is to establish a well funded translational research continuum that is dedicated to identifying the mechanisms underlying neuropathic facial pain and to developing groundbreaking therapeutic strategies that will permanently stop the pain of TN and related neuropathic pain syndromes.”

MR: In your opinion, how are the foundation, its scientists, trustees and volunteers doing in relationship to its purposes and goals?

I think we’re doing fantastic, and I’m not someone prone to hyperbole. I’m very careful. I never would have dreamed in 2011 when we had zero dollars that we would now have collected a little more than $4 million. That $4 million has had a multiplier effect and raised even more funds for the research. I find that to be phenomenal. I think we are doing and our scientists are doing a wonderful job and making strong progress. I’m gratified and surprised that we have done as much as we have done in the period we have been in existence.