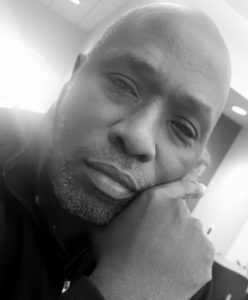 Anthony Rhines is no stranger to pain.  In 1999 he was hit by a drunk driver and was told at the time that “you are lucky that you survived” it. He suffered three herniated discs, which were fused. A rod and screws were also placed in his spine. Two years later these same screws loosened and the rod had to be removed. Because of this, he now has a weak back as the holes were filled with “surgical putty”.

In 2002 he suffered from viral meningitis. And in 2006 he had a procedure to deal with colon issues.

Then in 2007 he experienced “tremendous head pain” and didn’t know what it could be. His wife took him to the emergency room where he had a contrast MRI and was told it was trigeminal neuralgia. It was amazing that the ER folks at Abbott Northwestern Hospital knew about TN. He, like most people, had never heard of this disease and doesn’t think they have many people come in to them with this problem. He was told he needed to see a neurologist; he was fortunate in that he already had been working with the Noran Group of neurologists, one of the premier groups in the country, for six years prior due to his previous illness, meningitis. He says the doctor in the ER was a “tremendously nice person” who knew his neurologist. When he looked at Anthony’s medical records he saw he had already suffered a lot of pain.

He was able to get in to see his neurologist quite quickly and she prescribed three medications to help with the pain the TN causes. When she mentioned that they “needed to get him straightened out (because) there are people that have issues like this that have committed suicide” he stormed out of the room and didn’t return for at least 12 minutes.

For about four months Anthony could not eat any solid food at all. He lived on soup and broth and eventually soft bread and mashed potatoes. He lost 30 pounds the first month. The left side of his mouth was so affected he couldn’t touch his face or brush his teeth. Air blowing on his face was intolerable and would cause him to “bawl like a little baby” (which happened while he was in a car with his son and a friend. The friend didn’t know what to think!) It was a “constant barrage of pain” during that time. He saw his neurologist monthly.

At the time his son, JonWalter, was 14 and he became his “more or less … babysitter”. He would come home directly from school to make sure his dad was fine. When he was old enough to drive at 15 he would become his chauffeur.

By six months he could not “take it anymore” and underwent MVD (microvascular decompression) surgery two months after that. He was in the hospital for four days because five hours after surgery there were complications. There was an extra blood vessel in the area that caused a problem with his left eye; it cleared up on its own. And he experienced hearing loss. After the surgery the pain was not a constant barrage anymore, just more of a “settling in” as he was used to pain in his life by this time and had a high tolerance for it. But it still took 18 months before he could begin to work again, part/limited time. He said he was feeling a lot better than what he had been. He says he is back to about 45% of his previous life. But he will never do a 50 – 60 hour work week again. “It’s just not possible. Too much stress. Nerve pain in your head is debilitating.”

He had owned a small online marketing and repping firm that does fundraising and he ended up having to shut it down before the surgery. Previously he had been putting in 60 – 70 hours a week getting up at two or three o’clock in the morning to deal with manufacturers in China. Now he was feeling like he was a non-productive member of society, a non- contributing member to his family. “I would just be totally down and out for days because the pain was so bad. You just start thinking you’re worthless.” This caused depression as his self worth or self-esteem was at an all time low. Him and his family’s “lifestyle totally changed dramatically.” He knew he was lucky that his wife still had her good job!

Finally, two years after the surgery, he was able to start work again for about three or four hours a day, maybe 20 hours a week.

Then the pain migrated to the right side of his head so he had another MRI done. It showed the surgery was still intact so he became more medicated. He went on temporary disability because he just couldn’t handle it anymore. He did work a little bit for another year and a half but with time the meds just weren’t working. And he lost another 20 pounds! “I knew something was different.” It turned out to actually be a tooth problem this time … a cracked tooth that had to be removed.  An ice pack would numb it so he could sleep. (He uses medication minimally because he does not like pills. Right now he is at 4 gabapentin and 1 or 2 tegretol a day.) He feels lucky that his pain level is not at the severity level of others (from what he has read) and hopes it will never be.

Anthony began this journey at age 42. He is now 53 and he was told that he could be having an early onset of MS, Parkinson’s or even Alzheimers. His father passed away at age of 66. He just wants to make it past that. He looks at his life and wonders “What is the next thing I am going to have to battle with?” sprinkled in with “Why me? Why is all this going on?”

Anthony explains his pain as being not anything one could understand without going through it. “When you have pain in your head or in your brain, that is a pain you can’t … grasp”. He did go to his dentist to make sure it was not a tooth issue. When he did research he discovered the Facial Pain Research Foundation Facebook page where he found out most people start with thinking it is related to a tooth. (Most TN warriors do not have a neurologist at the start. However they do end up with one!) While reading other people’s short bios there he realized it could be worse. Some of them had been through numerous surgeries with no effect. He discovered it most commonly affected women in their 60s and 70s but could also attack young children, which he found to be totally unbelievable. “I’m like, you’ve got to be kidding me! That frightens me tremendously. Why do these things happen??” and “I mean why would it happen to a kid? That doesn’t make any sense to me.”

He feels he won’t be around long and wants to do something positive. Leave a legacy … “What can I leave for others??” It’s not about the money. His story is not as dramatic as others (says he) and he doesn’t know how people with small children deal with the little ones and the pain at the same time. He finds it challenging to look at the Facebook page because it is so depressing for him. He’s like “Oh my gosh! I don’t know how you are making it. It’s just unbelievable!”

Anthony and his wife have always been caregivers. “I’m a person who will do things for others before I think of doing for myself. Even though I have pain, I was just trying to do whatever I possibly could for other people.”  He started a little online company for his son. It is called www.sokguru.com. Why socks? His son came home from school one day with some socks and when asked where he got them, JonWalter said he knew his dad, was in the manufacturing, importing and marketing business and knew a lot of people … then he asked “why don’t you do something for yourself instead of doing something for others all the time?” So they did it together. And with this website he created a revenue source and they did a “small little deal” with the Facial Pain Research Foundation and gave 40% of their proceeds in June to TN research! They are now prepared to give between 10 to 15% on a monthly basis.

Anthony now wakes up almost every day “with pressure on the left side of my head. After about an hour or two it goes away.” He deals with that pain “OK”. But “If I get stressed out it can become very bad … also if it’s raining or cloudy, I know it won’t be a good day with the pain in my head.” He has about 15 “bad days” a month, meaning days he can’t do anything at all due to the pain being so bad. He doesn’t get good sleep and his mind is in “high gear like a race car” all the time. But he has found that if he can just “numb up” (he uses ice packs) the pain when it is bad, sleep and “hopefully when I wake up I’m not having to deal with the pain.”

What hurts most is his memory not being good anymore. It’s not the same; not what it used to be. And he misses his dog, Goldie, who was great comfort to him.

When I asked Anthony what advice he would give to others new to this path he replied “You have to have a doctor who really knows you. Who will truly go to bat for you!” He knows he is fortunate to have already had a neurologist in his life who knew him well and that is not the normal. (He thinks it would be interesting to find a doctor who has gone through this.) He feels without his relationship with his neurologist he could have ended up in a psych ward because “my pain is just going on and they have no clue.” He has had his relationship with this doctor for almost 18 years, which is only 9 years short of the length of his marriage.

He also feels that, although stress may be a big factor, (which he was under daily without being fully cognizant of it) there may be a bacteria or virus or even a chromosome involved. After his first MRI he was asked if he had suffered any trauma to the head (which to him was like a boxer being hit over and over again) but he didn’t think of his car accident since it was “so long ago”. It was extreme and traumatic. We know that any car accident results in a whiplash at the very least so it is not something to be dismissed.

Although Anthony has his “bad days” he knows that he is in a better situation than a lot of other warriors and he is grateful to be able to share his story.