How I Fight TN: Mandi Ginn-Franz

Previous Next
How I Fight TN: Mandi Ginn-Franz 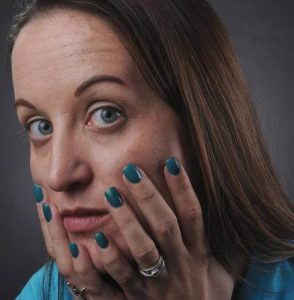 Nine years ago, I went to lunch with some colleagues at work, and when I returned to my office I had one of the worst toothaches I have ever felt.   I immediately left work and went to the dentist, who after tests and x-rays, could not find anything wrong with the tooth.  Throughout that week, though, the intense toothache continued to occur.  After several dentist appointments and doctor visits that week, I was told I could possibly have Trigeminal Neuralgia.   I was referred to a neurologist and that is where my TN story really begins. The neurologist put me on nuerontin right away and suggested an MRI of my brain.  My MRI showed lesions on my brain and I was experiencing a lot of pain along with other symptoms, including tinnitus and very blurred vision. Due to this,  I spent a day at the Medical College of Wisconsin with various doctors, including a neuro-ophthalmologist.  It was during that visit that Lyme was suggested as a possible cause of my Trigeminal Neuralgia and other symptoms.  I was referred to another specialist and tested for Lyme which came out positive right away.  Since then, I have been treating both Lyme and Trigeminal Neuralgia.

Over the past 10 years,  I have been referred to Mayo Clinic twice, but have never made the commitment to go.  I have also consulted with several different surgeons about various options, but ultimately I am not a candidate for surgery due to the cause and type of TN I have.   I take up to 22 pills daily, combination of medicine and supplements.   I have tried most of the typical anti-seizure medications and currently find the most success with Topamax and Lexapro, along with pain relief (MMJ and Tramadol) as a combination.   I also eat gluten, dairy, and sugar free which also has had an impact on managing my pain levels overall.    I have found an amazing support network of other TN patients, and I do whatever I can to raise awareness and funding for a cure.   In addition to my previous work on the Young Patients Committee, I work on the Laugh Your Face Off fundraiser in Chicago, and work hard to get many buildings in both Chicago and Milwaukee to light up teal every year for awareness day as the Chicago lead for the TN Awareness Day campaign.

My advice to any TN patient would be to find ways to get your power back.  I cannot control TN, but I can keep fighting to help others, to bring awareness, and hope for a cure or better treatment.  My support network is very important to me, and I rely on other TN patients to help me cope and understand on those really bad days.  Find your tribe and then find the small ways that you can fight back against TN.  Be a Warrior!  I may have TN but I refuse to let it have me.