Next
When TN Takes Your Youth: Megan Dever 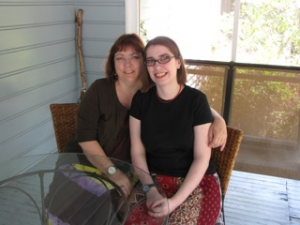 At a time when most teenage girls have their heads together whispering over their newest fashion find or the cutest boy on the block, a time when young girls’ hopes and dreams for the future begin to take bloom, Megan Dever’s personal dreams came to an abrupt halt, because at the tender age of thirteen, pain became her every day companion. Instead of best friend drama and adolescent sibling squabbles, doctors’ appointments became her norm. With her mother Kimberly holding steadfast by her side, Megan began the uncharted journey of searching for a cure to the incapacitating facial pain that began to rule her life. Having her first surgery for what doctors believed to be sinus-related pain, Megan recalls her first year in high school as “the first year I missed a lot of school because the pain got worse.” Sinus surgery failed to alleviate the pain, but she maintained status quo with the assistance of the unfailing support of a caring mother and the initial stages of a pain relief regimen.

But those early beginnings of pain could not prepare Megan for what was to come. Like most trigeminal neuralgia (TN) sufferers, Megan can recall the exact date and time she felt the onslaught of crippling neuralgia pain that would eventually lead to her diagnosis and rule her very existence. TN, also known as the Suicide Disease because of the unrelenting nature of the pain, can affect any one or all three of the trigeminal nerves crossing the plane of the face. Unfortunately Megan’s disease takes the path through all three nerves and is triggered by the most common of activities. Eating, talking, and simply brushing her hair has become triggers to a lightening bolt of pain that drops her to her knees in its intensity. In Megan’s case, wind, bright lights, loud or constant noises such as the car engine, and even a light kiss of the cheek can aggravate her condition. The attacks are said to feel like stabbing electric shocks, burning, pressing, crushing, exploding or shooting pain that becomes intractable.

All of these symptoms and more barely describe what Megan remembers happening when at sixteen she was enjoying a family vacation to Manassas National Battlefield in Virginia and, as she describes it, was struck with pain that felt like an electrified knife being thrust into her right sinus, pain that then radiated outward “like an epicenter of an earthquake,” and continued unrelenting for several hours. What followed after the intense rush to get Megan to safety was an even more intense search for answers as the attacks came more often and grew in intensity.

Yet Megan endured and today looks back on those years with a sad sense of nostalgia. There was pain, she admits, but “I had a life and friends and even a steady boyfriend I thought I would marry one day.” Always an excellent student, she pushed herself to rule the pain instead of the pain ruling her and she kept her vision of attending the University of Mary Washington steadfast in sight. Historic preservation was her passion and the desire to get her degree in her chosen field under the tutelage of the most esteemed professors pushed her through her freshman year. But as she began her sophomore year, Megan’s TN pain increased to a level such that she could no longer concentrate on her studies. Recalling the memories, her expressive face is taken over with the anguish she felt as she began to lose hold of her life’s dream to earn her degree and enter a career of preserving and restoring the buildings, objects, or other artifacts of historic significance. “I was going to protect the country by protecting the things that are important to it,” she proclaims, then quickly covers her face with her hands and her eyes suddenly well with tears as she describes the beginning of “when I lost my life.”

School studies and social life ceased as Megan had her first microvascular decompression (MVD) surgery in 2007 at the age of 19 in an attempt to put an end to the pain. MVD, sometimes called the Jannetta procedure after the surgeon who perfected its science, is a surgery where the surgeon enters the skull through a one-inch hole behind the ear. The nerve is then explored for an offending blood vessel, and when one is found, the vessel and nerve are separated or “decompressed” with a small pad, usually made from an inert surgical material such as Teflon. Megan woke from surgery with no neuralgia pain, but her freedom was short lived when six months later the neuralgia attacks once again took over her life.

Again mother and daughter went in search of pain relief for Megan. Options were researched, thought over and then dismissed one by one, and eventually Dr. Jannetta himself recommended a second MVD. The MVD caused double vision that cleared within a few weeks and pain relief lasting a mere three months. The optimism that had driven Megan throughout her young life slowly disappeared as her pain returned. Because pathology had been found during the second MVD procedure, Dr. Jannetta believed there could have been nerves or arteries missed during the second procedure that were still impinging on Megan’s nerve, so he relented on performing a third procedure. Once again pain relief was brief, with the pain returning with such a vengeance that it left Megan wondering if living was an option she was brave enough to choose. “It isn’t that you want to die,” she tries to explain, her voice breaking audibly. “It’s that you just want to make the pain go away. And sometimes the only way to make the pain go away is to make yourself go away.”

Between her second and third MVDs Megan had to turn to strong pain medication to help her through, medication which is still needed to see her through most days. Megan admits the anticonvulsants, antidepressants and opioids that now manage the pain enough to stop the screams have taken a toll on her memory. “I think slower,” she acknowledges as she thumps the left side of her forehead with her fingers, “and I can’t talk as clear.”

This once detail oriented, fun-loving young woman withdrew more each day as the friends that once surrounded her began to disappear one by one from her life. She apologizes to us during our meeting for not remembering how to carry on a conversation because she rarely has visitors outside of her mother and brother. Looking at Megan, a beautiful 23-year-old young woman, reminds us that TN carries with it the strange legacy that the pain it causes isn’t visible on the skin or face. It doesn’t mar the looks or change the appearance of those suffering with it such that those looking can see and say to themselves that they understand. It’s this legacy that can eventually lead those suffering to reclusion. “People don’t understand,” Megan tries to explain, “so they just go away.”

Megan and her mother are currently weighing the options of a fourth MVD. When asked if she is hopeful that the surgery will help, Megan’s face reddens and she drops her voice to almost a whisper. “You don’t understand that I can’t hope,” she says, her hand covering her heart as if to protect herself. “Hope hurts.” Those last two words, more than any spoken throughout the interview, sum up how Megan sees her life today. But Megan’s mother, who has stood unwavering by her daughter through this journey, stresses emphatically, “We are going to find a cure. Megan’s story doesn’t yet have an ending.”

Looking back at Megan while her mother speaks, you can see a glimmer of light sparkle in Megan’s eyes. Hope may not be a word Megan allows herself to speak out loud for the crushing heartache that occurs when reality happens, but hopelessness is not in Kim’s vocabulary. It’s through this mother’s drive to find pain relief for her daughter that hope travels in a soundless wave of determination through the air and finds its way back to Megan, determination to see light at the end of Megan’s journey through pain, and it’s this hope that sees them both looking forward to even the tiniest possibility of a better tomorrow.