An Interview With Dr. Wolfgang Liedtke

Previous Next
An Interview With Dr. Wolfgang Liedtke 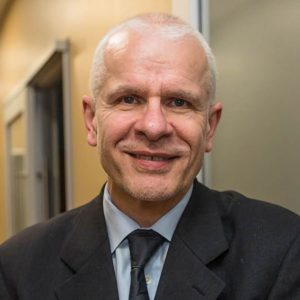 Wolfgang Liedtke, M.D., Ph. D., is a professor in the Departments of Neurology, Anesthesiology and Neurobiology at Duke University in Durham, North Carolina. He is an attending physician in the Neurology Clinics for Headache and Trigeminal Sensory Disorders and an attending physician in the Innovative Pain Therapy Clinics of the Department of Anesthesiology at Duke. Both as a physician and as a scientist, his focus is on understanding mechanisms critical for pain and inflammation in order to alleviate suffering of patients afflicted by therapy-refractory pain – pain that does not respond to treatment – with the emphasis on trigeminally-mediated pain (trigeminal nerve pain, also head-neck pain), but also other nerve and joint pain. As an attending physician, he has encountered more than 1,500 cases of refractory trigeminal pain disorders, as well as chronic migraines.

The Facial Pain Research Foundation has provided a grant to Dr. Liedtke and the Duke University Center for Translational Neuroscience as one of the Foundation’s projects to find cures for trigeminal neuralgia and related neuropathic pain.  Dr. Liedtke and his group at Duke are exploring how material science and material science combined with cellular engineering can be used to make transmission of neural signals in the trigeminal system normal again.

Mervyn Rothstein, who was an editor and writer at The New York Times for 30 years, now writes the “Stage Directions” column for Playbill.com, and is a former member of the Tony Awards Nominating Committee. His first symptoms of trigeminal neuralgia occurred in 2005.

MR: You Are Both A Neurologist And Neuroscientist.  Why Did You Decide To Focus On Pain In Your Career?

As a junior trainee, I was exposed to pain because of the places where I trained, in Zurich, Switzerland, and in Germany. Programs there were run by expert and master physicians, and I was impressed by how they were able to help patients suffering from chronic pain. And I was also profoundly touched and moved in a very basic human level by the suffering that I saw, and that I could not fail to notice. Seeing how the physicians treated and diagnosed these patients impressed me, and I volunteered to help them from my junior perspective and work with them and do the first interview of the patient. I saw that I could do this pretty well. I have a good feel for it and can communicate well with patients who suffer from chronic pain.

When I shifted more toward basic science in a laboratory setting, I happened to make a discovery that was important and relevant to pain, which was sort of serendipitous because I was aiming much deeper and looking for basic new mechanisms. It turned out that the TRPV4 ion channel, the signaling molecule, which I discovered two decades ago, is a relevant, significant player in pain, also craniofacial pain. We found it expressed in the trigeminal ganglion in small neurons, which meant this could be relevant to pain.

Then, moving to Duke University, for my first independent faculty position, with the lure of being both a physician and a scientist, I decided that pain would be a very appropriate theme for me because it would allow me to practice pain medicine and also move forward my pain-related discovery in the basic science research lab.

MR: What Is The Importance Of Your Trigeminal Neuralgia Research Study And What Potential Is There For Having An Impact On The Study Of Other Diseases And Possible Cures?

I’m extremely grateful for the support of the Facial Pain Research Foundation because it enables me to take a project that is at the drawing board stage and has some initial data to it and give it a more solid base under its developing legs.

On the drawing board the imagination was to harness the power of stem cells that we engineer to become a certain type of cell that will help to function as an anti-pain generator and get that specifically engineered cell close to a key anatomical site of the trigeminal system, the cisternal trigeminal nerve root, which is the target of the well-known microvascular decompression operation and is also the target for the gamma knife radiation procedure [two medical methods of eliminating or alleviating trigeminal neuralgia pain]. Rather than operating or radiating we propose to bring cells close to the nerve root and engineering the cells so that they function anti-pain, so that they secrete and produce natural anti-pain modulators. By forcing them to reside close to the trigeminal nerve root, they will calm down and bring down the excitation level and inflammation level in the nerve root and in the entire trigeminal system.

And in positioning these cells right next to the cisternal trigeminal nerve root we will use a material that functions as a holding device. The cell-holding device we will also accomplish what the traditional, good old-fashioned microvascular decompression accomplishes, which is to protect this critical part of the trigeminal system against mechanical injury.

In a parallel approach, while we move forward with “encaged” cells, we will also try to take advantage of a new nanomaterial [material made up of building blocks that are at the nanoscale] that I have done work on previously through my collaborative network here at Duke University, where we have material scientists and chemists and we harness the novel advantageous properties of a model carbon nanomaterial to use as a shield/ wrapping material for the trigeminal system. It could be described as facilitating a neuro-protective environment.

These are the two approaches I’ve articulated and for which I’ve received support from the Facial Pain Research Foundation and which might have significant implications for other types of pain. These approaches could be applied to other nerves that were injured, resulting in nerve pain, for example a lumbar root of the sciatic nerve, the cervical nerve roots that supply the arm or other peripheral nerves (sciatic, ulnar, median). Both methods are translatable to these other types of neural injuries.

MR: Why Haven’t Scientists Completed This Research Years Ago? When Someone Asks You Why Didn’t You Start The Research Many Years Ago How Do You Respond?

The conception of these ideas is based on the thoughts and fantasy and imagination one has but also on new theories or other findings that are sprouting up within the field, what you read and what you hear at conference meetings. Microvascular decompression works in a number of patients, not in all, and it has other issues involving it, so I was certainly not the only one thinking about trying to upgrade or make it more contemporary, more focused. What I’m proposing is based on relatively recent findings that I hope to take advantage of. So these ideas weren’t possible before these new findings were made public.

MR: You See Patients In Pain Every Week.  Do You Really Believe That Cures Can Be Found For This Disorder, Which Is Often Called The “Suicide Disease”?

I strongly and profoundly believe that transformative steps can be taken to deal with this form of pain. It depends on the definition of cure. There is the possibility of a so-called miracle cure, where something is done and the patient is totally cured – the pain is out of the life of the patient who was tormented by trigeminal neuralgia. But the miracle cure is harder to accomplish than a decent and what I call a transformative level of pain control, whereby pain is reduced to a level where patients can lead a normal life again, can participate in life and deal with the remaining amount of pain disturbance that the disease still poses. I believe that is something we can accomplish through implementing and translating research for more and more patients.

MR: What Are The Biggest Obstacles You Face In Translating Your Preclinical Findings To The Clinic?  What Are Some Of The Ways You Hope To Overcome Them?

We live in exciting times.  We have so many tools at our fingertips. If only we had the money. That is one obstacle – availability of funding to realize our ideas – not just bold ideas that lead to brave new experimental approaches on the laboratory bench but also something is translatable, and is equally daring or has a decent chance of leading to dramatic advances.

Also there are administrative and so-called red tape obstacles that would not cost a lot of money to overcome – rewriting or redoing the complex rules that govern the scientific research game and especially the rules governing translation into new treatments that will be available to patients. Scientists and doctors can make their voices heard, but this is an involved national and international decision-making process where our views are of limited impact. I am enthusiastic that the Facial Pain Research Foundation is becoming partial to the ways of how to revisit and reform the process.

I feel privileged and I’m very happy about this association. They are like-minded people. I intend to go after this disease. I attempt to accomplish this goal of transformative change of treatment effectiveness through novel engineered treatments. That is my mantra. And there is nothing hollow about it. Every single letter of that is true to the core of who I am as a professional.

So with that, I notice that the Facial Pain Research Foundation is managed and is driven by people with whom I have zero disagreement in that respect. I am so happy and so proud to be a part of it.