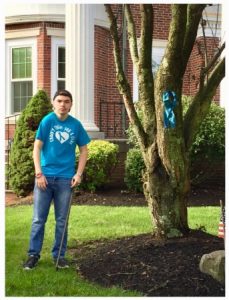 Chris Nolze was diagnosed with brain cancer in 2007 at the young age of twelve. It was his initial diagnosis and the first of his major medical health issues.

He received radiation treatment after they did a biopsy on the tumor and placed a shunt in his head. It seems that where the tumor was located there was a lot of spinal fluid built up in his skull that was not draining. It was only the beginning of a number of challenges to follow.

When Chris had his wisdom teeth removed in 2012 he had complications that resulted in dry sockets. He was in pain but both he and his doctor thought it was due to the surgery. But it didn’t go away. Finally his dental surgeon suggested that they look into trigeminal neuralgia.  It was a stretch since he did not fit the “norm” being a young boy with pain on both sides that was constant.

Neither Chris nor his parents had ever heard of trigeminal neuralgia. But since they had tried every possible medication at least twice and then in combinations and none of them gave him any relief they sought out his neurologist.

His neurologist and oncologist both thought it was highly “unlikely” that he had TN since he wasn’t showing the “proper” symptoms. Besides, it “just wasn’t possible”! For the next six months his parents took him all over this country looking for a doctor who would have another diagnosis.

Eventually they found Dr. Ben Carson in Maryland who tested the nerve on the right side of his face with a Rhizotomy treatment, which is the numbing or affecting of the nerve directly to see if it is the cause. “It helped the pain completely! … It was definitely a breath of fresh air.” It was the first relief he had had in six long months. “But I still did have constant pain on my left side.“

Shortly thereafter Dr. Carson scheduled Chris for an MVD (micro vascular decompression) on the other side, the left side. As he was recovering from that surgery the Rhizotomy “gave out” on the right side so they scheduled him for another MVD on the right side this time.

The pain was relieved but the incision would not close. They discovered that the skull bone itself was infected. They brought in a plastic surgeon to remove a piece of the skull about the size of a quarter. He placed a mesh plate over the opening created and then pulled the muscle up and over it (some of which had also been removed.) Eventually the incision closed properly.

Chris was pain free for about a year.

Then both sides came back and at about the same time. And around this same time he also contracted a rare case of intractable singultus (out of control hiccups). His is only the third case in medical history with this particular form.  “They were speeding up on a daily basis and it got to the point where I would be doing over 200 hiccups in a minute! And it just kept getting faster and faster.”

It was a chiropractor, thinking outside the box, who put pads near his mesh plate and connected a tens unit to it. When it was turned on the hiccups stopped “instantaneously!”

So began another search for another doctor, this time with a tens unit connected to his head! Chris and his parents traveled the entire country again, finally finding Dr. Mark Linskey in California. He was actually Chris’ last and final hope of not having to live the rest of his life with a tens unit taped to his head.

“In every sense of the word, Dr. Linskey saved my life” says Chris. An MRI showed compressions on both his brain stem and on his facial nerves. Dr. Linskey thought the compressions on Chris’ brain stem might be the cause of the hiccups. While performing a repeat MVD on the right side of his face he tried lifting two major arteries off the brain stem. The hiccups stopped.

Out of curiosity and for research sake, Dr. Linskey released them and allowed them to go back where they were and the hiccups started back up again. When he lifted the arteries, they stopped. This confirmed that the cause of the hiccups was finally found! Since that surgery his right side has been not only TN pain free but he hasn’t had an abnormal case of hiccups since.

Once Chris recovered from that surgery they did a repeat MVD for trigeminal neuralgia on the left side. That was in 2014 and he is still pain free to this day!!

Although he cannot do any activities that might cause trauma to his head and has to avoid all sports, Chris is able to work part time. He is also studying online for his college degree, which he plans to receive this year.

In that same year of 2014, he joined the Young Patients Committee of the Facial Pain Association. It is a small group of less than 10 people who are supportive of anyone with facial pain under the age of 40. They promote awareness and help research for the really young suffering from all types of facial pain (not just trigeminal neuralgia.)

Chris also started his own foundation after his bout with cancer. He wants to give back to the community who “gave to my family and myself as we were going through everything. … I also wanted to raise funds for medical research for a lot of these radical conditions out there, especially trigeminal neuralgia.

“I focus on raising funds for research … and I have actually raised and donated $692 from my foundation to the Facial Pain Research Foundation” by selling teal colored t-shirts with his foundation logo on the front.  A school friend of his hand knits teal scarves and he sells them also. All proceeds are donated to FPRF.

Chris does all he can to get the word out and to bring awareness. He has been recognized by the mayor of his town in Tom’s River, New Jersey, a couple of times already, with township proclamations that show that his foundation’s efforts are being recognized. He received one in 2016 from Governor Christy proclaiming October 7th Trigeminal Neuralgia Awareness Day! Since then, Chris has also received multiple proclamations from the town council recognizing every time the foundation helps out or works to spread awareness.

Chris volunteered that he wouldn’t change a thing if he could. “It helped sculpt me into the man I always wanted to be, that I was meant to be, and even if I had the opportunity to somehow stop everything from happening and go back in time and just live it out as ‘normal’ I wouldn’t change anything.” He is very insightful for his age. And very brave I might add.

When asked for what advice he would give to anyone new to the pain of trigeminal neuralgia he replied “The number one piece of advice I would give is to not give up and to not lose hope because even though you may be faced with a hundred people saying ‘No. It’s not possible.’ that doesn’t mean that there is absolutely no help out there for you.” And “Let your heart kick in and just say ‘no I’m not going to give in until I get the answers – until I get the proper treatment. I know something wrong is going on right now.’”

He added “It made me grow up much faster than I anticipated but in a way it also helped me.” I can vouch for that. Chris certainly seems a whole lot older and wiser than any 22 year-old I’ve ever known!